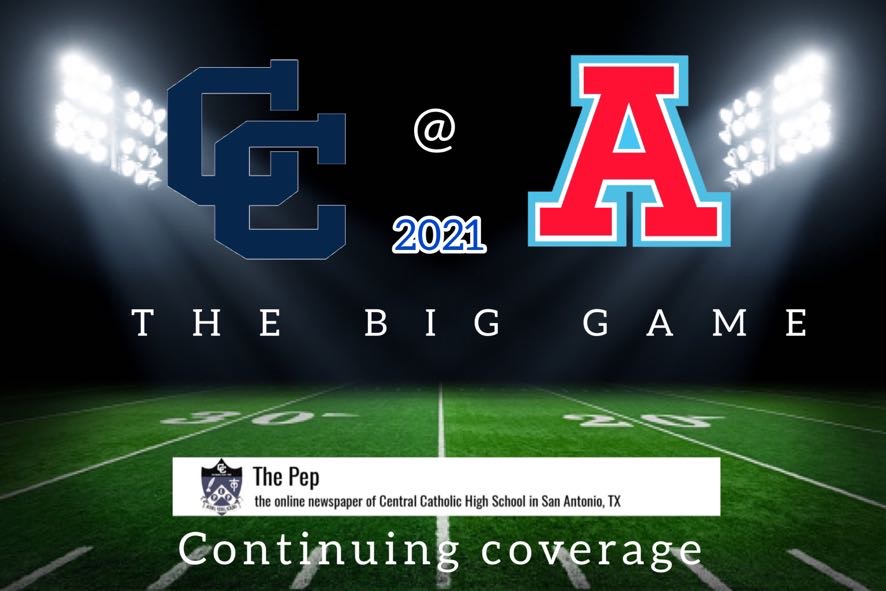 With all the tension regarding this week’s big game, as one side of the rivalry gets their heads locked in on the game, the other is simultaneously doing the same thing. The Antonian Apaches are ready for Central, as they have been anticipating this game, like anyone has, for two years. Their Head Coach, Danny Padron, was graciously willing to sit down exclusively with the Pep, and give his point of view from the other side, respectively.

Padron has been a football head coach for 47 years, and this is only his second at Antonian. Due to the outbreak of COVID-19 on Central’s side last year, the game was ruled a no contest. This will be Padron’s first rivalry game as Antonian’s head coach, against Central Catholic. “You always approach these rivalry games, as another game,” Padron says. “The hype is already there, and your job as a coach is to get your guys prepared to play.”

He continues, “When you have a good, healthy rivalry, then that’s good for both teams. I think you want that, and when it gets bad is when people are not doing the right thing… High school football is about education, and so, we can still get the right thing out of an educational value, and a good rivalry.”

Padron explains how his job at Antonian started with everybody talking about the huge rivalry, saying, “That’s when everyone wants to talk about Central Catholic.” He continues, “It’s just normal…”

Mentally, Padron has wise words as he prepares his team for the game. He mentions winning, and the importance of the rivalry playing into the game, explaining, “We’ve talked to our kids-it’s not always the best team that wins, it’s the team that plays the best, that wins. If you were looking at Central Catholic, and comparing them, there’s no question that Central Catholic has the better team…very talented and well coached.”

He elaborates, saying, “You never know, and that’s why you play these games. So, things happen, and I’m pretty sure Coach Santiago is preparing his team the same way and letting them know, it’s the team that plays best and that’s whose going to win.”

One contributing factor to Antonian’s place in district compared to Central’s, Padron says, is the number of underclassmen that are playing on the varsity squad this year. This has been transparent with a lot of the district’s schools. “The reason why all those schools are starting those younger ones is because that’s all we have,” Padron says. “We don’t have the depth like Central has, you know, the number of players. We’ve got actually twenty-seven guys on our varsity, and we brought up some JV guys.”

He continues, “It is good experience for them. We don’t know whether they’ll be starters next year or not. It’s not like you play them to give them experience for next year, you’re playing them as a necessity, because that’s all we have.”

The community of Antonian, according to Padron, has been telling him about the hype for this annual contest. Although, as a coach, he guarantees that the hype of a big rivalry game does not intimidate him one bit. “I was at Judson for five years, and we played a lot of big games and stuff. Our job as coaches is to get our kids prepared, so we try to take the hype out of the game and just concentrate on what we have to get done.”

And with that, their mindset is about winning. The goal for Padron and his Apache squad, like any other game, is to win. “The values is in winning when it’s not going to affect us in the playoffs… We’re locked in at the four spot.” He continues, “There’s certain bragging rights. I got a lot of people at St. Matthew’s Catholic Church where I go to church. A lot of Antonian and a lot of Central- all good friends… They’re going to be bragging one way or the other, so, you want to be on the winning side of that situation.”

He guarantees the hype from a communal point of view, saying, “There is going to be a great hype from our community,” but also explains the educational side saying, “We could probably lose nine games and beat Central and say that’s a successful season.” He finishes by saying, “That’s the impression I get from our community.”

One thing Padron says he, his staff, and team are trying to avoid is the smack talk. He takes the educational values to a different standard when it comes to what some may consider rivalry talk. “We discourage that with our players, and even with our parents. So, we try to go about doing it the right way and try to have our kids encourage each other and not trash talk. We won’t allow that.”

He was even asked if he wanted to send a message to the other side, and he immediately refused without hesitation. He explains, “We realized Central has a lot of good athletes, and is well-coached, and we don’t do any talking.”

Coach Padron says that he agreed to the interview because of the team’s counter belief in trash talking and saying “derogatory” things about the other side. He says that he and Central’s Head Coach, Mike Santiago, have been good friends for a long time and that a professional relationship between them was formed years back when they coached at the collegiate level for two different teams. Nonetheless, The Pep is appreciative of the interview with Coach Padron and looks forward to the battle on the gridiron this Friday night.

The game will take place at Ferrara Stadium on Antonian’s campus, and will be broadcast on KSAT’s local affilate MeTV, (OTA channel 12-2) and in the Big Game Coverage App. Stay tuned for more extensive and exclusive interviews from the Pep.