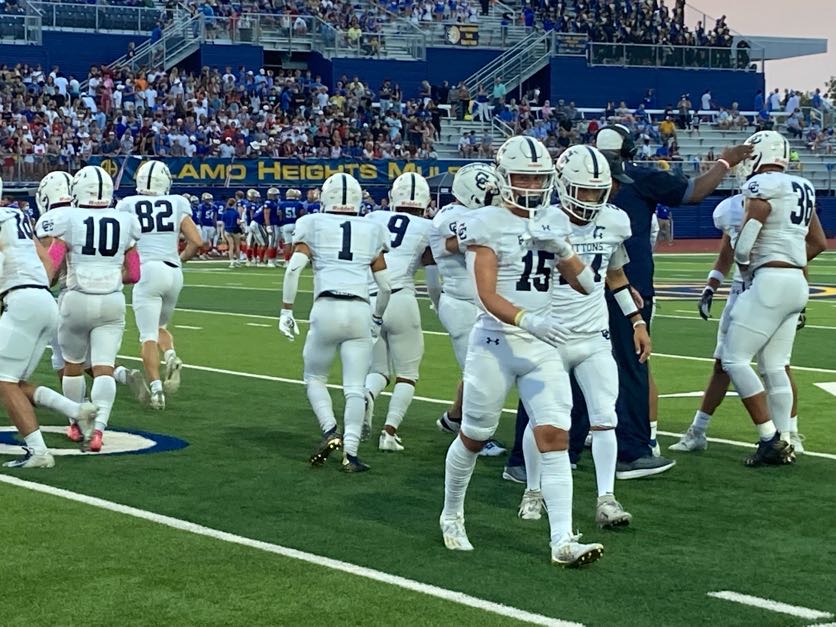 The Button football team’s bye week took place last Friday, and the well-deserved break couldn’t have come any sooner for the 7-1 powerhouse Button football team. With that, the task for the team is this Friday at home against Katy St. John, and next week the season conclusion against Antonian.

Head Coach Mike Santiago was exclusively interviewed, one-on-one, as he talks about his success so far with the team this season and looking to the task of St. John, coming off the much-needed bye week.

“I judge the team by how I feel, and I was tired, and I’m sure they were,” he starts. While his explanation is not exactly depicting the team’s overall performance, he did mention traveling back-to-back weeks into the Houston area was also a bit tiring and stressful.

Nonetheless, Santiago’s long experience as a football coach allowed him to explain the typical bye-week for a football team, and what he does with Central saying, “We only practice three days during that week. It’s a good time to kind of let the body heal, let wounds recover, let the mind heal a little bit… We practiced a little bit Tuesday, Wednesday, and Thursday. We gave them another three-day weekend off, and we came back (on Monday) trying to get this party started again.”

He continues, “It wasn’t a great practice, and it typically isn’t after a bye-week… We talked about that…Since it’s time to get the juices flowing again for this final push.”

Looking ahead to Katy St. John, the final regular season home game, Santiago says practice is key; while he was not worried about the quality of the practice, his focus is how they looked as a team. “It’s really about what we’re doing this week, you know, I’m more concerned about how we look as Central Catholic and how they look as St. John’s. If we look good, (by Friday) we’ll be fine.”

While enjoying the bye-week, the team was overwhelmed with the jubilant news that three players have made the San Antonio All-Star team, and will play in the San Antonio All-Star Game in January. The three players include Ben Rios, Sylas Gomez, and DeAndre Marshall. Santiago had plenty of positive words to say about it. “I think we’re the only private school to get more than one, and so three is the max, outside of the specials, (kicker, punter, etc.) and these are three really deserving guys.” He continues, “It’s just one of those unique years, we got twenty-nine seniors, and there’s only twenty-two starting positions.”

Santiago was hesitant to make any conclusions about the final two games, which includes Antonian, the rivals in the red jerseys. However, he does claim that the team has been taking things one week at a time, so their primary focus is St. John. “This week it’s St. John, and next week it just happens to be Antonian and it’s for the district championship.” He continues, “I don’t care who it is, it doesn’t matter. That game is for the district championship, it’s not about Antonian. That’s how I feel, and I think that’s how the team feels. It has nothing to do with beating Antonian… It doesn’t matter if it’s Antonian or if it’s the Dallas Cowboys, that’s whose next in line that we have to beat to win the district championship and achieve our goal.”

Some other big news that was released this week following the interview was that Lineman Ben Rios also made the All-American team, which consists of the best 100 high school football players in the entire nation. That game will be broadcast right before the San Antonio All-Star Game on January 8 on NBC. However, as for the team, they have those two games remaining before seeding is determined for the playoffs. Central is the only team that is undefeated in district play so far.

The game against Katy St. John is on Friday, October 29. Kickoff is at 7:00 p.m. at Bob Benson ’66 Stadium and it is also senior night. The game can also be streamed in the KSAT 12 Big Game Coverage app, and on KSAT-TV.