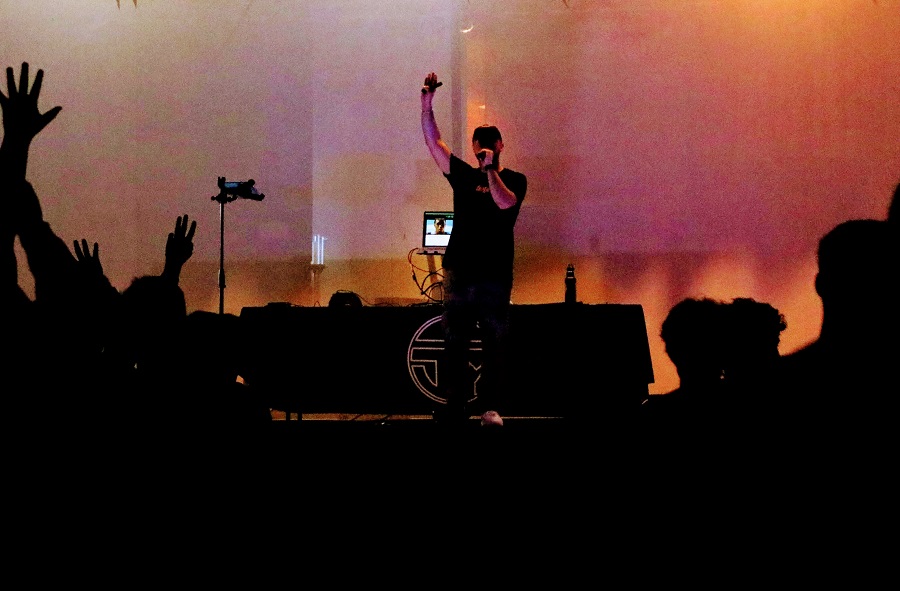 A special guest popped in this past Thursday at Central, as a part of Marianist Heritage Week. Central grad and hit Christian Rap artist Joe Melendrez, ’04, stopped by the school for a special concert. The concert is a part of his “Chosen” Tour, in which he is visiting different Catholic schools around the country, to talk about and express his love for God through hip hop.

He says during his time at Central, he really could not sing that well, but his love for music and for God, is what called him to combine the two together. He said that returning to his high school is just wild and that this is the place where his dream first took flight. “To be back here is an honor. I had so many powerful faith moments of my life occur at this school, so to be able to come back and serve and inspire my brothers, means a ton to me.”

At the age of fifteen, when a high school student, Joe was featured on MTV’s “Becoming,” which was a show where lesser-known artists would recreate popular music videos from already popular artists. What was going through Joe’s mind at the time of his trip was just a normal reaction of anyone who would be invited to take part in such a big event. “I was pumped to be from Texas, and fly out to L.A. to then be able to do what I love to do. It was a lot of fun, but it also provided a lot of clarity and confirmation as well.” Talking about the time before he flew to Los Angeles to be a part of this show, Joe explained how he had “already met Jesus,” and knew after his trip, how the fame and bling was just not for him. “I knew that being in L.A. and seeing what that was like, I did not want to be apart of that specific industry. I wanted to focus more on faith and God.”

Joe is a graduate of the University of Dayton, a sister school to Central Catholic, where he majored in Religion. From there, Joe immediately got a job out of college, to go and teach at Chaminade College Preparatory in West Hills, California, which is another sister school of Central. He worked there for eleven years as a youth minister and Religion teacher. He also talked about how the Marianists, were really the backbone of his success. “The Marianists totally formed my life in how to serve, and being born in Texas and going to school in Dayton, they became my family. When I did not have family going to school in Dayton, they would take me in and I would have dinner with them. They are just huge role models and really strong pillars of faith in my life that lead me to be the man I am today.”

Joe specifically has and always had a love for hip hop and rap. He explains how his love for rap would inspire him as a young man. “I would write poetry and raps in the back of my notebooks during my English classes here at Central. “Rosary Rap,” which was my first album, was written by me in the back of one of my notebooks during one of my classes.” Joe also explains how music in general is a very powerful tool. “Music connects in a powerful way that other things can not. For me to combine my love for God and love for music is just so important.” Hip hop, being one of the number one genres in the world today, is just something Melendrez says he can build off of, and to try and get people to get closer to God. ‘To be able to use this influence of culture and bring God into it, could be a game changer. My prayer is that everyone knows to love Jesus, and I am doing whatever I can, and hip hop is just one median of connecting Christ to others.”

His dad and longtime local radio host, Sonny Melendrez, was the one who pushed him to make Central Catholic his choice for high school. “I was initially going to go to another high school, but my dad told me to give Central a chance for one year. Central did something that changed my life forever and I think the “Brotherhood,” is just something I wish every guy could experience. What you get out of it is something different that you will never get, unless you are a part of it. While at Central, I met the Lord and started my journey of faith.”  He describes his relationship with his dad as a positive one, and explains how his dad’s love for broadcasting helped wake up a performer inside of him that he never knew he had. “I was always super shy in high school, and considering I played basketball, I would never sing. I did not like to do stuff that I was not good at. I had done a talent show in eighth grade, that woke up this performer inside of me. Seeing my dad, over years and years of being in front of a microphone and broadcasting, I have learned by observing for years, I did not know that I had it inside me.” Joe also had a fundraiser for Central when he was a student, in which he raised money to install a new sound system in what is now the Historic Alumni Gym. A plaque in the foyer of the gym is dedicated with his name.

To anyone looking to become closer to God, Joe says, “You have to realize that God is alive. We do not serve a dead God, we serve a God who is alive. Nothing at all, can separate us from the love of God. There is NOTHING you can do, that can separate us from God to where he says that he does not love you anymore. I have made choices in my life and I am sure that we all have, but God still loves us and he wants what he has planned for us all. You must go to him, in ways of adoration and mass. Spend time with him by listening to Christian music, or download a prayer app. Do something, that you love, to bring you closer to God.”

Joe’s albums and songs are available wherever you get your music. You can also check out his website at www.joemelendrez.com for upcoming events, and his “God Swagg Apparel” shop where you can “rep what you believe,” according to the website.