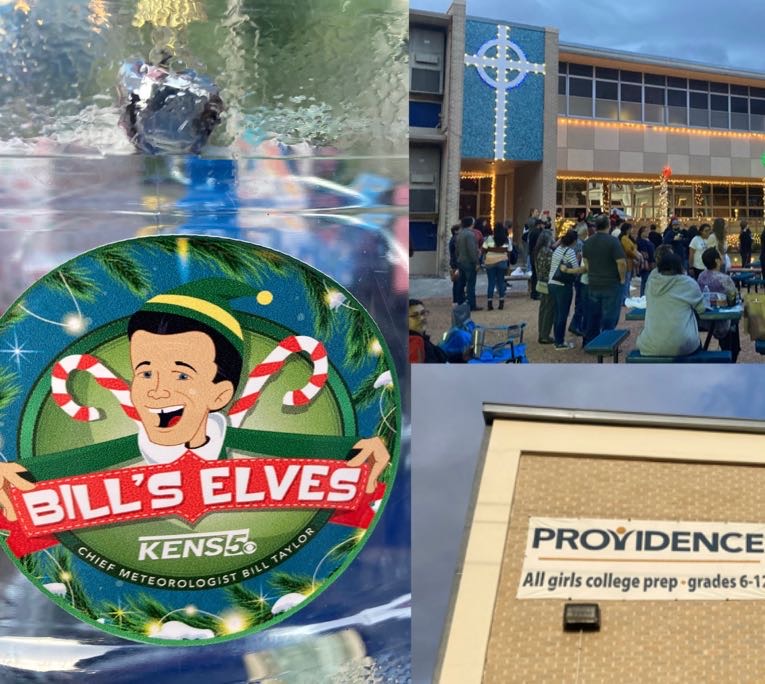 Providence Catholic School is already getting the community in the Christmas spirit. The all-female institution located next door to Central hosted it’s 18th annual Christmas Tree Lighting on Sunday. Festivities at the event included a photo op with Santa and Mrs. Claus, a fajita plate sale, a bingo game in the gym, showcase of student talent including a Christmas-themed performance from the show choir, and KENS 5 Meteorologist Bill Taylor hosting a seasonal Bill’s Elves Toy Drive while present at the event.

On the historic side of things, Providence is celebrating it’s Platinum Anniversary of 70 years. The school was founded in 1951 by the Sisters of Divine Providence, who are also responsible for operating San Antonio’s Our Lady of the Lake University.

For Principal Dr. Alicia Garcia, the tree lighting tradition is much more than another event at the school, and serves a significant purpose for not only the school’s legacy, but the Sisters’ legacy as well. “This is a family event. It tells us that the Sister’s of Divine Providence are alive and well,” she says. “Their legacy is about empowering young women, it’s about family, it’s about community, and this is what we do- we celebrate it today, and despite the pandemic and everything that has been going on in our world, we need to take some time to thank God, we thank the Sisters, and the Providence community.”

The community turnout, seeming to impress event organizers, was also something Dr. Garcia described as ‘amazing.’  She adds that the school was ‘blessed’ to have had Bill Taylor and KENS 5 showcase the lighting live on the 5:30pm newscast, while Taylor was also collecting toys for San Antonio children in need since around the start of the event, with the help of Central Catholic’s JROTC Cadets and the U.S. Army.

Taylor, who is a renowned weather man with the San Antonio CBS affiliate, spoke with The Pep graciously about his special mission in the 25 years he’s been with KENS 5, to get school supplies to kids at the beginning of the school year in August, and toys in the hands of kids every holiday season, which is what he is better-known for. “This is seventeen years of Bill’s Elves. They came to me, [KENS] and said, ‘we’re going to help out Child Protective Services, they got thousands of kids in need, we need to get them toys for Christmas… and we want you to be the face of it,’ and it was such a blessing because I didn’t come up with this idea, I was just the beneficiary myself of being (kind of) in the right place at the right time,” Taylor says.

“I was just so happy that we were going to be doing it, and it’s gotten bigger and better every year,” Taylor continued.

It’s growth over the years has shown, and anyone from San Antonio will have seen the Bill’s Elves logo either on their television sets, social media feeds, or at their neighborhood grocery store. From Providence’s event alone, Taylor and his team projected 300-400 toys being donated. For their first time being present at the event, he says it’s impressive. Usually when the team is present at one of their annual public locations such as Target, they collect more than 1,000 toys.

Taylor and the rest of the KENS 5 team was grateful for having Providence and the community host their cause at the event, and with the Platinum Anniversary taking place, Taylor was stoked to be a part of the fun. “This is phenomenal- to invite us in, of the seventieth birthday of Providence, I mean this is so cool! We’ve never done this event before, so I hope this becomes our annual toy drive, and that we’re a part of this.”

He continues on by saying, “You see the community support, the Providence Family is here in full, and it’s great to be a part of it.”

Taylor also didn’t hesitate to mention the Central Catholic JROTC cadets present at the event, who were great helps in packing and collecting toys to help the cause as well. “It’s great to have them out here. It’s so important that young people see this and are a part of this, so when we’re gone and up in Heaven, it’s continuing because the need is going to continue, but we can’t do it forever… we’re hoping that we create a culture, that continues every year.”

“Remember, we’re only doing it for a couple of hours,” Taylor says. “It’s not like we’re there all day or two days. But it really is the reach of KENS 5 that helps so much, but then, whenever you give San Antonians the opportunity to give, and the opportunity to love one another, they come strong.” He continues, “I’ve never been more impressed with San Antonio’s love for kids in this time of year. You really see how much people give and how many beautiful hearts are still out there. We’re in a time where it’s like, ‘oh this world is crazy, it’s so divisive, bad things happening,’ and then you see this… there’s so much hope, there’s so much love.”

Taylor was asked what brings him back every year conducting these toy drives. Taylor says, it’s the need.

“It’s just unfortunate, but, a city this size, that’s growing at the rate at which it’s growing, there is a tremendous amount of need at the same time. It’s like a parallel- we have all these great things, economic growth, fastest growing city, at the same time, all this inflation, depression… things are happening at a rate that, you know, almost equals it with homelessness and need. As that grows, you realize that we have to continue growing. That’s why it’s so cool that Providence came on and Central Catholic, and we can really get the momentum going this Christmas.” He continues, “When you are providing Christmas, for children that are foster children that are going to get one toy this Christmas, and you’re looking at it.” Taylor closes by saying, “I’m so humbled and blessed and privileged and honored to be alongside something this special.”

As the night grew, and just in time to broadcast live on air, Taylor did the honors of flipping the switch that activated the holiday lights in the quad area of Providence. The trees, library, and main building all illuminated with festive green, red, blue and white lights, only acting as a symbol that the holiday season is only getting started. KENS 5 and KENS Cares will have other drives coming up in the near future in case you missed this one, as well as a phone bank taking place December 2, where personnel from the station will be collecting donations over the phone. 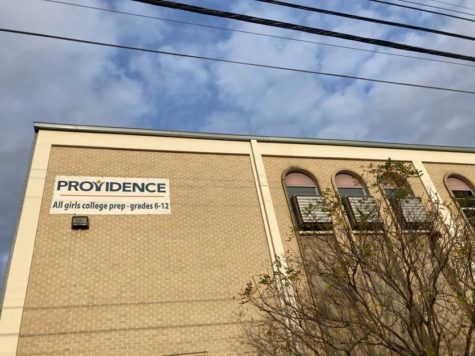 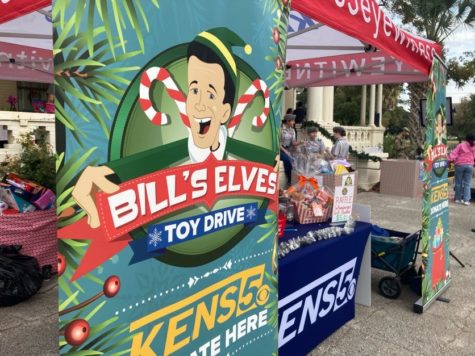 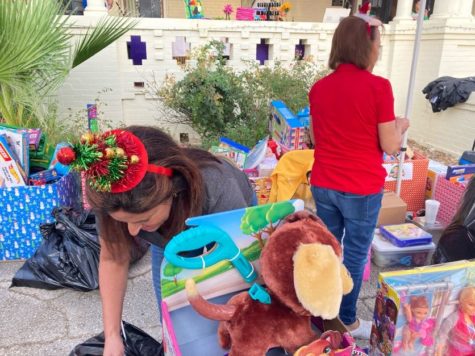 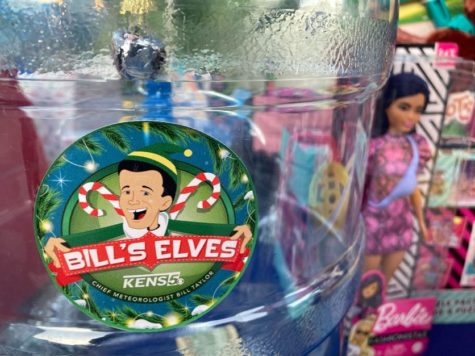 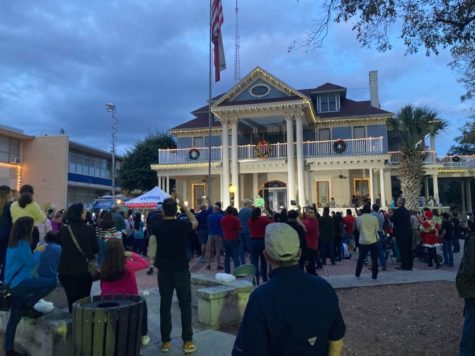 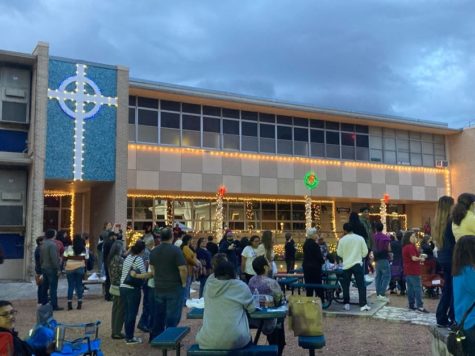 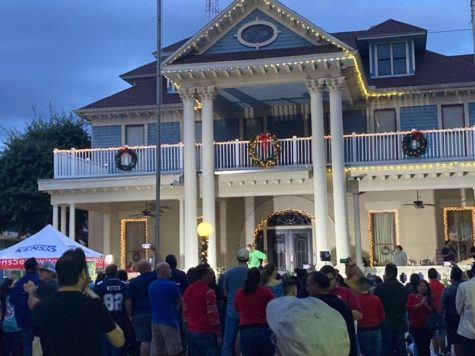 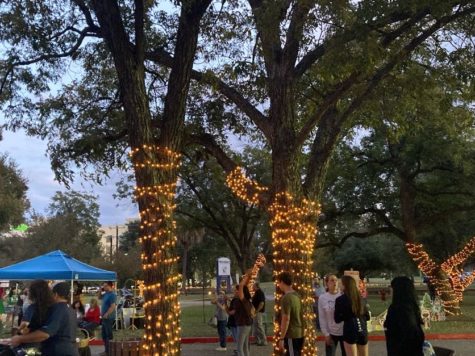 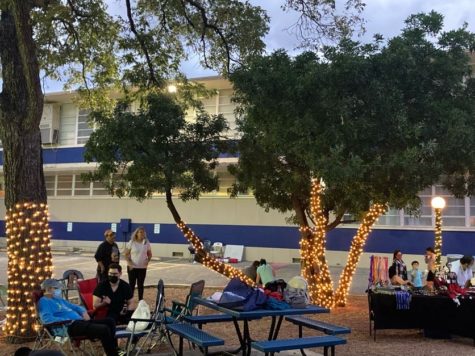 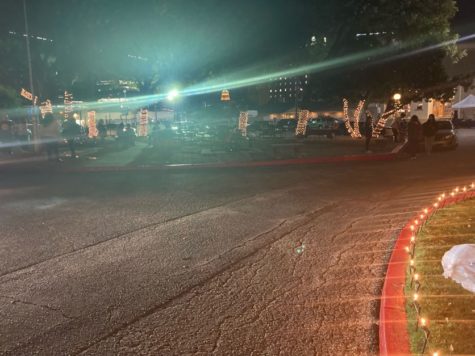 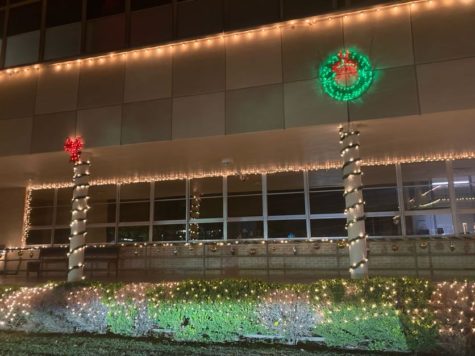